In 2012, Erin Banwell and friends founded Idea Fab Labs with a simple vision:  they believed the combination of high tech and traditional tools in a collaborative space would spark the imagination of the community.  A Santa Cruz native, Erin found himself starting the first Idea Fab Labs in a warehouse in Chico as an open environment meant to foster innovation through hands-on learning and collaboration. Then, he quickly determined that the uniquely creative community of Santa Cruz County deserved the opportunities that his vision could offer too.  The Santa Cruz location opened in 2015. 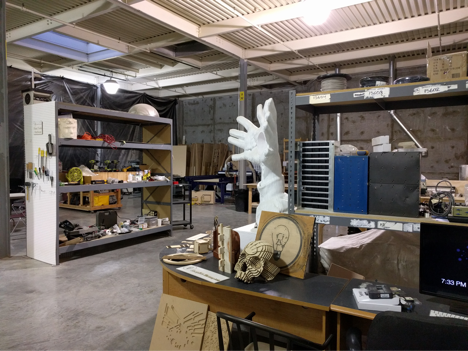 The Fab Labs provide members with access to expensive machinery like laser cutters and 3D printers, for example, and the training to use them safely.  The space also has simple power tools and a full jewelry making station. There is a gallery space as well to exhibit work.  More than the materials or machinery, however, Idea Fab Labs is about the makers who join and work in the space.

“I honestly can’t wipe the smile off my face being here,” says Ziggy Ziegler, project lead and daily operations manager at the Santa Cruz location.  “Being surrounded by artists, techies, burners, programmers, roboticists—it’s an incredible feeling.”  Ziggy loves helping new members, too.  “Seeing someone with an intention and helping them realize that intention—it’s amazing.” 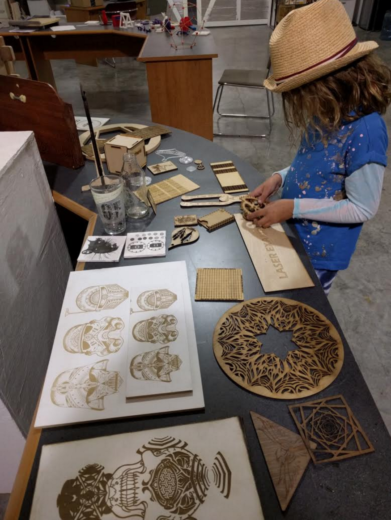 At the Santa Cruz Maker Faire, Idea Fab Labs will be showcasing their augmented reality Virtual Sandbox (see the lead photo for a visual!).  Built from a PC running Linux, a video projector, and a Kinect game controller, the sandbox projects a topographic map onto sand that you can mold. As you reshape the sand, the map is immediately updated. You can create snowy mountain peaks, or water-filled valleys, and experiment with the effects of different terrains on water flow and drainage.  This interactive sandbox was built by Shannon Stillman, William Gilbert, Tané Tachyon, Karsten Wade, Austin Neff, David Van Brink, and Patrick Lewis from open source designs and technology.

Come play in the sandbox at the SC Maker Faire!